In the late 1980s, I was taught by a former dean of a library school named Ed Miller. He came from Phoenix to Tucson, home of the University of Arizona School of Librarianship. I learned a lot from him, but there is one thing that he stuck in the minds of his students: â€œIf you don’t get anything else from these courses, remember librarians are the bridge. between people and the information they need. In the years that followed I had a fairly good career, but I was always on the lookout for examples of quality bridge building.

A few weeks ago my wife said to me, â€œYou must see this new feature that they’ve put on my library webpage. Sure enough, what I saw brought my library school years back to life. It was a named function Wowbrary. When you click on a slide-out slide show of book covers, you are taken to a page that displays 20 titles new to the library, with book covers and text information. To the left is a topic breakdown of all the new titles added last week. You can come back to this place a week later or, better yet, sign up for a weekly email. To do this, you don’t have to prove that you have a library card. You just have to tell them where to send the file. Every email I’ve seen so far has at least a headline or two that I’d love to read.

After choosing a title, you can take advantage of an interface within the library catalog to reserve the article. At this point you enter your barcode number (or other proof) to show that you are an active customer. As you can add any number of libraries, I also signed up for New York Public Library publications, where I have an account.

I arranged a meeting with Rocco Cassano, the deputy director of the East Meadow Public Library in New York (on the site of which we had seen Wowbrary). He’s been a leader in library automation for years and was instrumental in getting Wowbrary. When I asked him how this service came into being, he told me that the Nassau Library System acquired it in 2018 and allowed its individual libraries to register if they wanted. At this time, East Meadow was beginning an era of transition – her half-century-old building was in the process of being completely renovated, so she didn’t choose Wowbrary initially. In 2021, a client asked the administration why the library didn’t have it. Considering East Meadow had just reopened at that time, it seemed like a good bet to shine a light on its new holdings.

After signing up, East Meadow hired a local web designer to integrate the new product into its main page. The library was able to customize aspects such as the display size of the book covers and the overall color scheme. Another incentive was the price after the consortium discount. An East Meadow librarian who purchases electronic materials for the library said, â€œWe pay the same for three or four audiobooks. “

Wowbrary is a project of Interactive Sciences, Inc., a company that describes itself as a “not-for-profit public benefit corporation, sharing the power of computers with everyone.” He came out of Palo Alto, Calif. 40 years ago, and much of his work centers around the Silicon Valley region, including peer tutoring for computer users and adding of technological resources to underserved communities such as Native American tribes. He also developed a project to teach middle school (and higher) students to program in Java.

Interactive Sciences president and co-founder Jeff Levinsky came up with the idea for Wowbrary when he was president of the Friends of the Palo Alto Library. A friend of his complained that he went to the library and scanned the new bookshelf for something to read, but the shelf looked clumped and uninteresting. Levinsky understood the nature of the problem: the best, most interesting new books are already being read by the time most people see the bookshelf. If his friend had looked in the catalog, he would have seen all of the latest bombshell novels and titles, but he should have looked for them specifically, one at a time. The solution was to create a program that highlighted the latest acquisitions and put them front and center. Since he had a background in computer science, Levinsky devised a program that did just that.

Interview with the program creator

I contacted Levinsky, and he was happy to arrange a phone interview. He is naturally very satisfied with the reception of his creation. To date, there are over 700 libraries on board with Wowbrary. As mentioned earlier, part of this success is due to its affordability. Levinsky said a typical public library in a consortium would pay around $ 375 per year for the service, close to the figure Cassano gave me for East Meadow. I was surprised to learn that Wowbrary’s income did not spread to other parts of the organization, but was raised just enough to keep it more or less self-sufficient.

The Nassau Library System uses Innovative for its ILS. I asked Levinsky if Wowbrary worked with most other ILSs. He said the company has made it work with a number of systems, including SirsiDynix and Koha. â€œIn fact, I haven’t come across an ILS that wouldn’t work with Wowbrary,â€ he said. It works with libraries to track migrations between systems.

When I mentioned to Levinsky that Wowbrary seems to do for books what Libby does for e-books and audiobooks, he said that the program can be configured to include electronic media as well. In fact, Wowbrary has a relationship with OverDrive. After the pandemic, Levinsky quickly realized that electronic media had to become a more important part of any library’s offerings, so Interactive Sciences adapted to the new reality. He pointed out that Wowbrary was particularly useful for showing off the large collection of ezines distributed by OverDrive.

I asked about Levinsky’s overall role in the business, and he said he’s involved in all aspects of interactive science and that there is a team that works primarily on Wowbrary. Wowbrary’s webpage states that the selection of books from the top 20 list is automated to avoid any kind of selection bias. Levinsky said, however, that some editorial control must take place during weekly publications.

Writing about library automation over the years, I have seen many useful and impressive products and services. In this case, I find the work of Interactive Sciences and Wowbrary inspiring. The whole effort is designed to enable library patrons to make better use of their libraries, and I’m sure my library teacher would raise his glass at that.

Examples of Wowbrary in action at the East Meadow Public Library 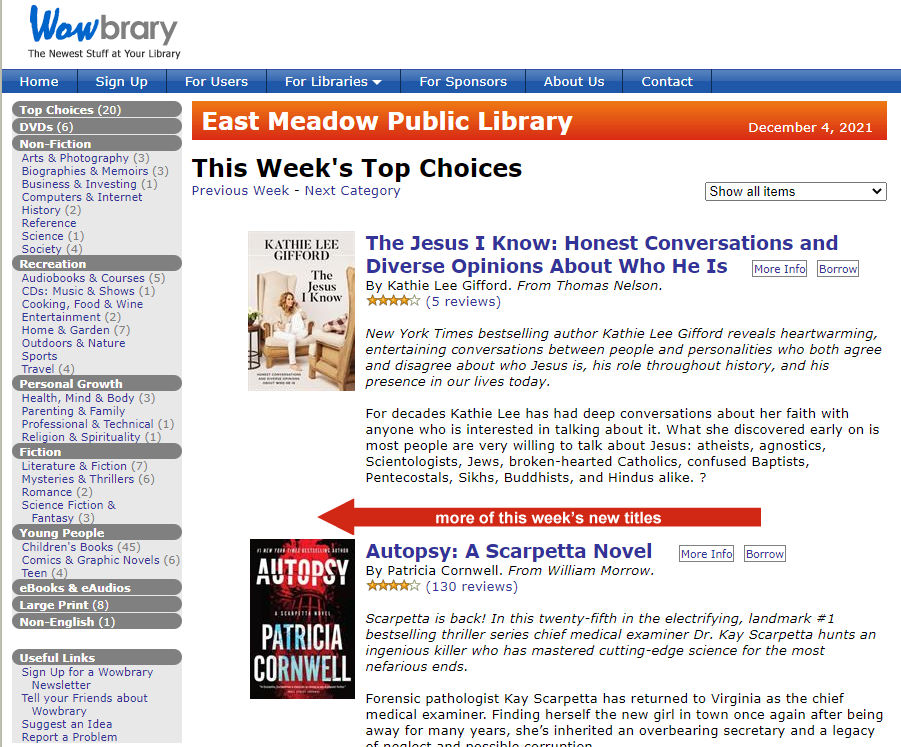